My little obsession with Dragon Age and the world of Thedas has never been a secret, nor has my adoration for the roguish dwarf, Varric. Maybe I love him the most because Varric and I are both storytellers, super loyal, and empaths. It’s likely just the chest hair though. 😛

If you’ve ever played Dragon Age 2, you’ll at least know of the existence of his book, Hard in Hightown. In Dragon Age: Inquisition, you can actually find snippets of the book as you travel Thedas. Amid all the chaos in DA: I, the chapters of Varric’s book always make me smile.

So, you can imagine the level of hyperventilation when I learned Mary Kirby would be completing Hard in Hightown as Varric Tethras. The novella officially landed in stores towards the end of July.

It follows the final case of Donnan Brennokovic, a grizzled guardsman on the verge of retirement. The hard part comes in when he finds a dead magistrate. He’s paired up with a green guardsman, Jevlan, who is based on Hawke’s brother, Carver, and together the two must solve this case, or face the wrath of their captain, Hendallen (AKA Aveline). In fact, many of the characters are based on Varric’s companions from Dragon Age 2, which sings to every fan of the games.

What I love most about this novel is how totally Varric it is. You can hear him narrate it without much imaginative effort, even without Bioware’s little snippet of voice actor Brian Bloom reading an excerpt. The metaphors are over the top, just like Varric speaks, and the descriptions take you back to Kirkwall instantly.

If I have to be totally honest, I’m not sure non-fans will find as much joy in this novella. You have to know the characters to understand the references. Those over the top metaphors fans love will probably annoy non-fans too, and I did pick up a few typos that could drive the grammar police to violence.

Hard in Hightown is a little pricey too, especially if you consider I paid less than double for The World of Thedas Vol II, which is MUCH MORE BOOK, and is also full colour. Having said that, Hard in Hightown is a collector’s item – another reason I doubt non-fans would be as interested in owning it.

I smiled from cover to cover, which made it more than worthwhile for me. 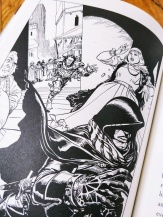 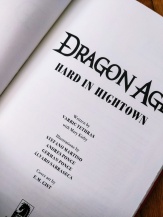 If you’re looking for a quick read for the weekend, look no further!

The artworks in the topmost image are by my talented friends Tallulah and Nerine. As soon as I have a more permanent residence, I’ll create a Wall of Varric, just wait.