I’ve never done a drawing tutorial, so this is scary. 🙂 Still, it’s been requested a time or two and I figured there’s nothing lost in trying. I chose small birds for this tutorial since they’re SO EASY to master, both in terms of drawing and painting. So yes, I’m totally saying this is a beginner-friendly tutorial.

I chose three birds for this tutorial, the Eurasian blue tit, northern cardinal and black-capped chickadee. I hope you know how to draw triangles, rectangles, circles and ovals, folks, because that’s all there is to it. 🙂

Before we officially begin, I’d like to apologise for the strange colour variants on the photos. It was a super cloudy day when I drew these, and the light shifts apparently confused the heck out of my phone’s white-balance.

Step one, draw a circle.

Step two, draw a wide triangle beneath the circle. The triangle will form a base for the wings later, but as you gain confidence when drawing birds, you could totally skip the triangle and just draw the ovalish-triangle-blob that forms the base of most seated birds. 🙂 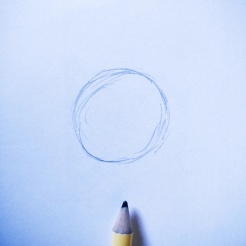 Step three, round out the edges of the triangle, to create the blob-thing I mentioned above.

Congratulations, you have a bird. Don’t believe me? Grab your eraser and clean up the linework, AKA step four. Just do try to be gentler with your page than I was.

Step five, the wings and tailfeathers. Draw a horizontal line, around the midline of your bird. Use the shoulder (the place where your circle and triangle met) as a guide of where it should start, and extend the line a little beyond the bird’s end (butt :)). Now you just have connect this freestanding horizontal line to the bird’s back, using a soft diagonal line with a slight curve. Yes, you just drew another triangle. Handy little buggers.

For the tailfeathers, you’re going to draw yet another triangle. Use the bird’s butt as a guide again and draw a diagonal line upwards, at a slightly different angle than the butt itself. Then complete your triangle by bringing down another line that will disappear behind the wing.

Step six, the talons. Draw two short vertical lines from the bottom edge of the bird, then add a slightly upwards angling line at the bottom edge of the two vertical lines. Add two half-lines to either side of the diagonal lines. Not a very good explanation, but channel your inner child and try to remember the upside-down tridents you used to draw for bird’s feet in kindergarten. Draw those. 🙂 Add claws and you have bird legs. 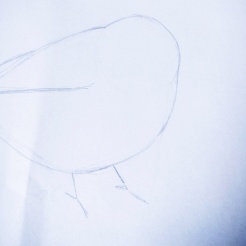 Step seven, the eye. All you have to do is find the rough centre of the circle you drew for the head. I do this by drawing two light, crossing lines like this. 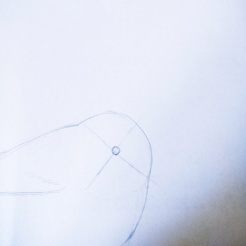 Draw a small circle where the lines cross. It doesn’t have to be perfect, you can eyeball the position. Punny, I know.

Step eight, the beak. Draw a small, sharp triangle towards the outer edge of the bird’s head. Use the eye as a guide. The beak should be slightly wider than the eye, and if you were to draw a diagonal line from eye to beak, the two should line up at their centres. 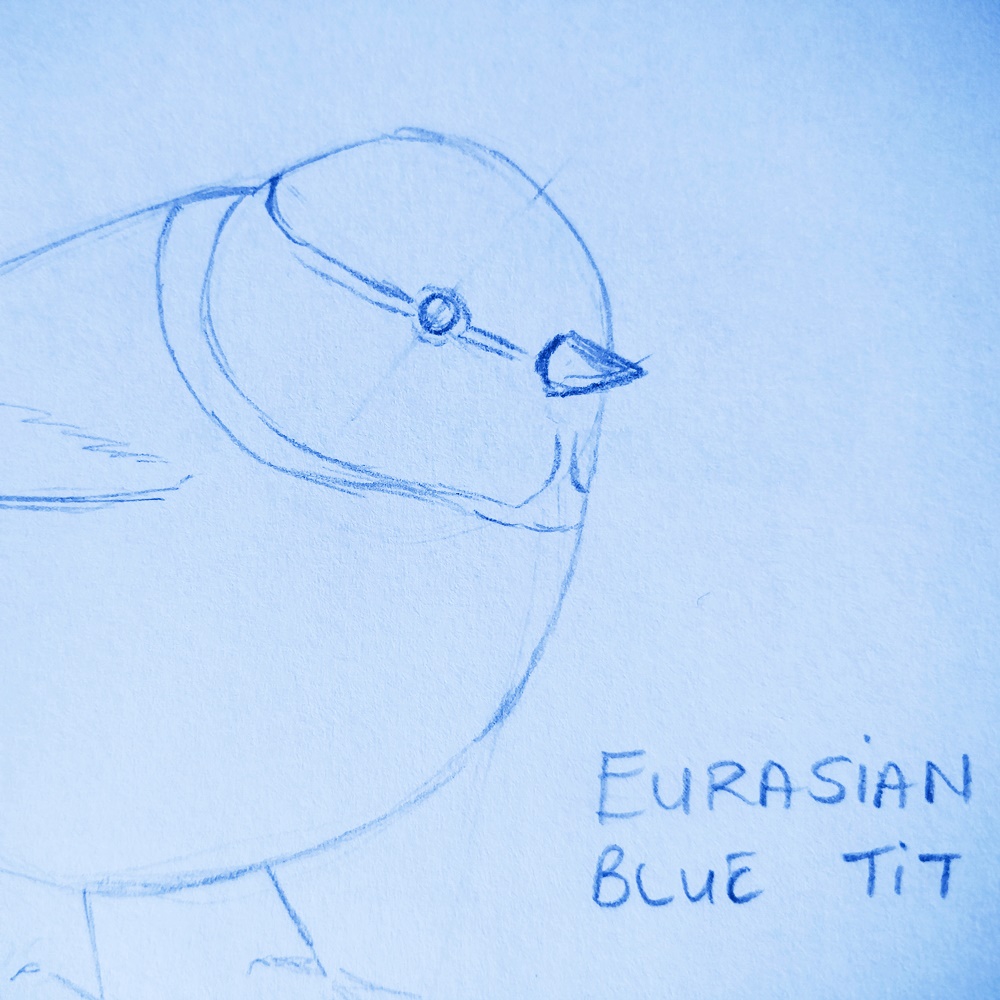 Step nine, add any markings or feather patterns the bird should have. I also thickened the talons, but forgot to photograph that. Don’t worry though, we’ll cover that in the next two drawings.

Yes, it really is that easy.

Step one, draw a small triangle pointing upwards for the head, and an oval below it for the body.

Step two, connect the freestanding edge of the triangle with the oval.

Now, draw a small triangle below the wing and a rectangle extending down from that. The rectangle should be around two thirds the length of the bird’s body. 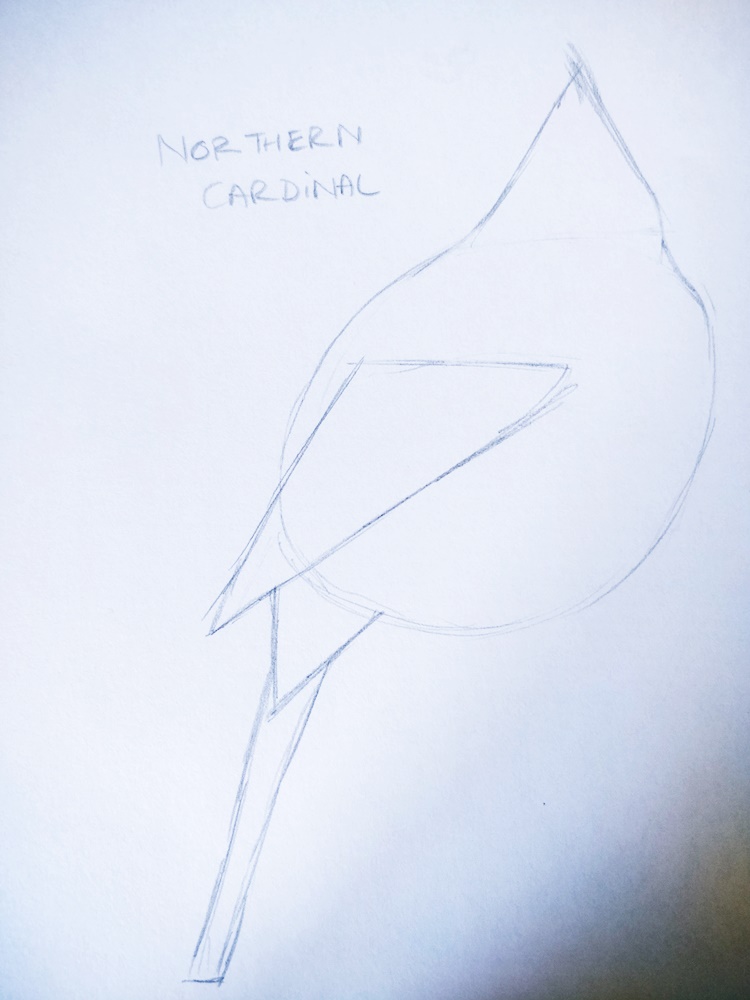 (Sorry again for the lighting!)

Step six, add some feathers. There should be small, fluffy feathers near the wing’s top edge, growing longer towards the bottom. As long as the shapes are organic, you’re golden. Don’t try to be too perfect about this.

Step seven, the talons. I also drew a stick for the bird to sit on here. Only the back claw will be visible from this angle, so that makes our job simpler. Draw four vertical lines for the legs, then add one finger and claw to the end of each leg.

A little tip to make it look more realistic is to slightly round the edge of each toe, so the claw will extend from a tiny balljoint. 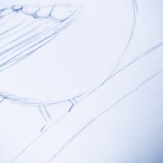 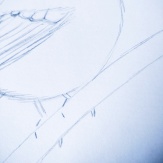 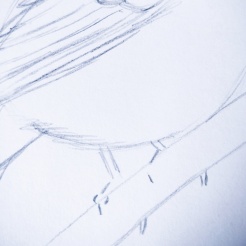 Now, the northern cardinal has a slightly larger eye than the eurasian blue tit, and it’s also a little more oval. 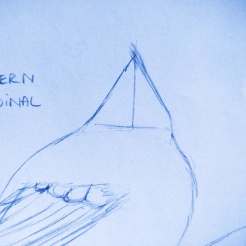 Step nine, the beak. This bird has a bigger, wider beak, so the triangle you’re about to draw should reflect that. 🙂 It should be placed closer to the eye, around that area where you connected the original triangle and oval. The bottom line of the upside-down T should cut roughly through the top third of the beak.

Step ten, draw in the markings or feather patterns.

The last bird is the black-capped chickadee, and is very similar in shape to the Eurasian blue tit. Instead of typing out all of the instructions again, let’s go with step-by-step photos. 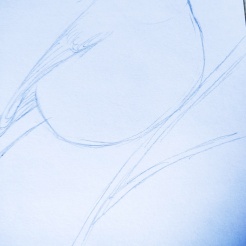 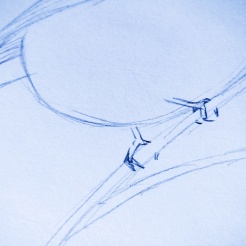 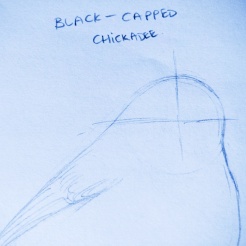 I used my watercolour pencils to colour these, then painted over with water. It was so simple that I didn’t take photos of every step, but as always, I worked in layers. These are the colours I used. 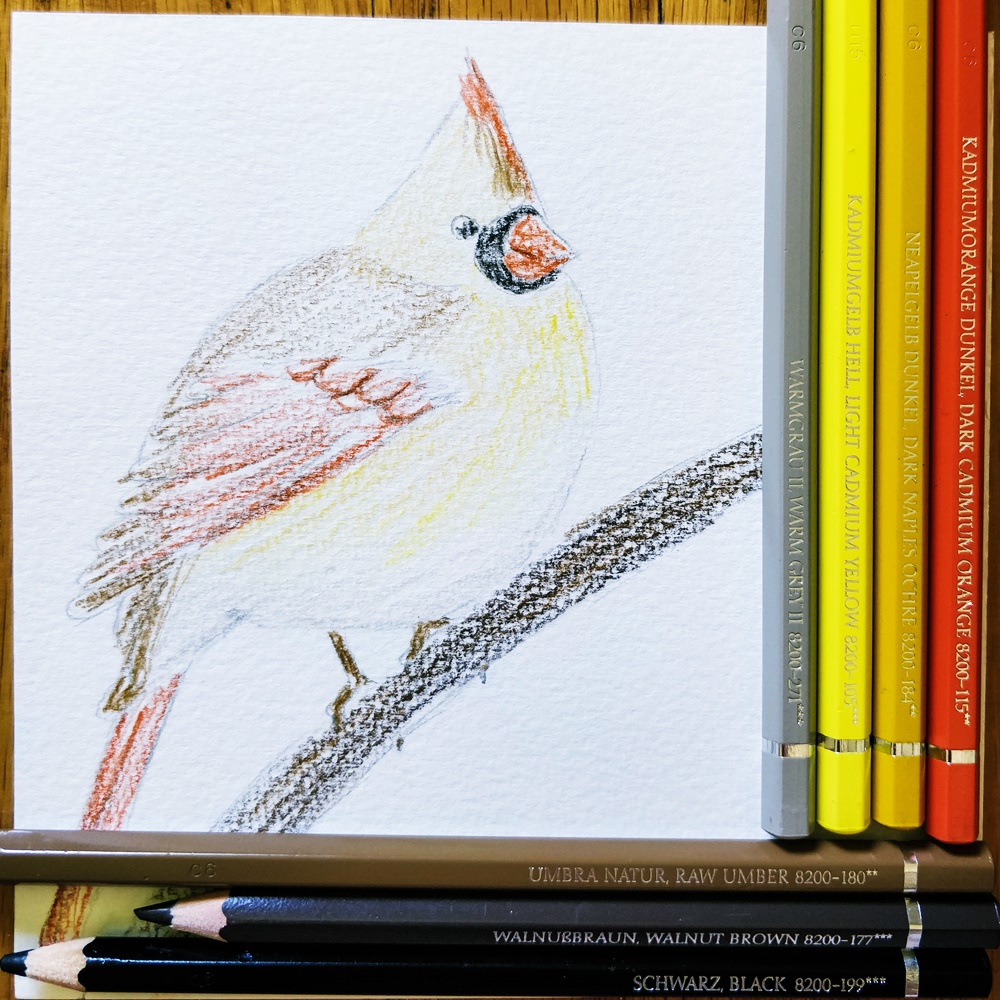 Put down your first layer of colour – lightly – while keeping a close eye on your reference. Remember to leave areas of white for highlights, especially in the eyes.

Paint with water and let dry. I went in with a wet-on-dry technique next, adding colour where I wanted a stronger pigment or deeper shadows. There’s no real tutorial aspect of this part, the key is to keep looking at the reference and build up the colour until it reaches the saturation you want. I have many in-depth tutorials on watercolours, if you want to check that out.

Anyway, these are the final results. 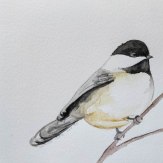 I hope you liked this as much as I did. I might even put these birdies up for sale in my Etsy shop.