So, this is week 8 of the #storycubechallenge. Once again, I left my story to the last possible moment. I don’t know why I do this to myself, but in my defence, it was a crazy week with a sick 2-year old. At least I wrote something.

I’m also working on a short story that I plan to submit to an anthology and I got back my editor‘s notes on The Physician’s Apprentice. A lot of brainstorming and prep for a new round of revisions have been happening. Watch this space.

If you missed the place where all of this began, here’s week 1. Also, week 7 and the Pinterest board for the story cubes.

Here’s our hero for week 8:

And this is how our story will look :

This is my take on last week’s cubes.

After surveying this house for a week, Andrew knew the old man would be asleep by now. The routine was solid; dinner at six pm, a glass of brandy at six fifteen, a shower at quarter to seven, then warm milk and a fistful of medication at seven sharp. Eight o’clock gives all that meds just enough time to put him out proper.

Andrew smiled as he edged towards the back porch. He fumbled around the doormat until he found the spare key, slid the metal into the lock and turned. The previous night’s effort to oil the backdoor’s lock paid off now – it didn’t so much as click.

He stepped into the house, silent and dark, and turned on his flashlight. He shrugged off his backpack and opened it, ready for whatever grabbed his attention. The kitchen offered a bottle of whisky, a fancy pipe and a packet of tobacco, as well as some loose coins from a bowl.

Oldtimer keeps a neat place, I’ll give him that.

The only object not neatly stowed away, was an open book on the coffee table. The floral crochet bookmark half-slid towards the centre of the book, almost as if it were hugging the binding. The stitch-work was shoddy. The work of old finger’s, I’ll wager. Prolly the passed missus.

Something about the bookmark caused Andrew to pause. Wouldn’t be right to take this. He put the bookmark back in its place, gently, before he continued his search.

Eclectic objects without worth or meaning filled this place, like a red fire truck on a shelf, a ceramic dove with a super-glued beak and snow globe with colourful glitter, dancing around some or another animated character. Family photos lined the walls and any open surface, smiling faces that followed Andrew as he walked.

A hand-drawn calendar, decorated with a grinning sun and clouds that winked, was stuck to the wall above a small desk. The following day’s date was circled in crimson with the words ‘Grampa’s birthday’ and a star sticker added to it. An open letter, drawn in crayon, caught Andrew’s gaze.

Gramps taks me fisin.
He bys me ice crem.
Gramps is tha best.
I lov him.
Andrew.

His own name on the page made Andrew jump. He’d never known either of his grandpa’s. Maybe stealin’ from some kid’s paw-paw isn’t the best idea. And it’s the old fart’s birthday tomorrow.

Andrew sighed and started to replace all he had taken. Except the whisky. I’ll have one on the old man’s big day.

It didn’t take long to find a glass in the kitchen. Andrew opened the cap and inhaled that oaky scent of honeyed gold – this was the good stuff – then poured a double into the glass. It wouldn’t be polite to steal the grandpa’s whisky and not leave him a glass, especially on his birthday.

Andrew smiled as he left, locked the door and returned the key to its place under the doormat. He took a swig of the alcohol, savouring the way it set his tongue on fire and lit a path to his stomach. The good stuff indeed. He saluted the house and disappeared into the shadows. I’ll toast him till I pass out. 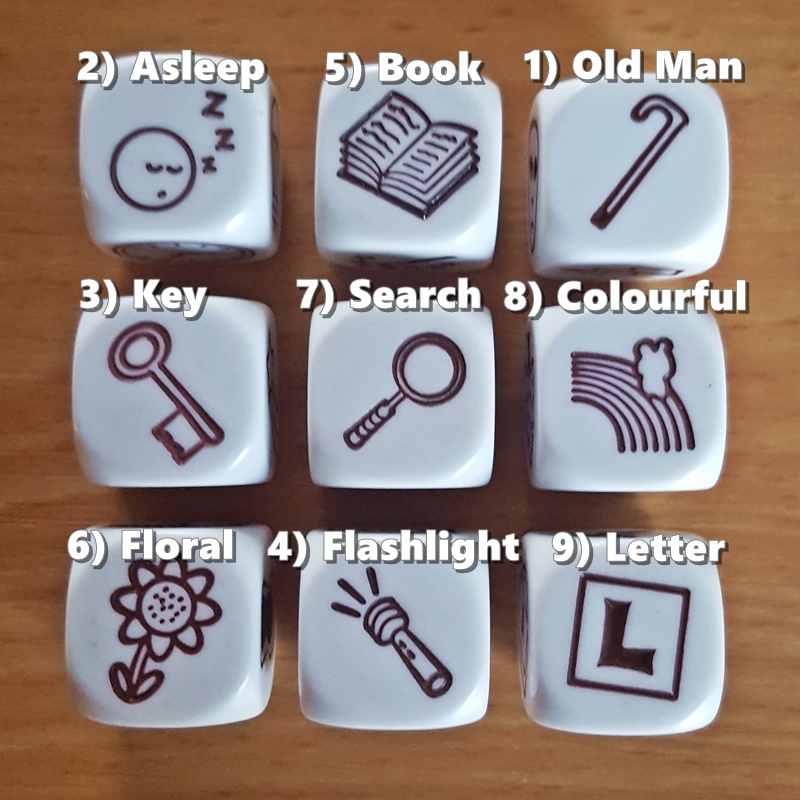 If you wrote something inspired by the cubes, please drop me a link or use the hashtag #storycubechallenge, so I can find and like it.

See you next week!