First of all, I’d like to thank everyone for their condolences and beautiful words concerning my grandmother. If you missed it, my gran passed away last week. It wasn’t a surprise, because she was sick for a long time before she passed. It still hurts though. I wrote a tribute to my grandma here.

Since this is a current chaos post, I want to start you off with the song I’m listening to on repeat at the moment. It’s called ‘Build me up from bones’ by Sarah Jarosz. It’s amazing.

If you’ve been following the blog and had a look at my social media (check it out in the sidebar), you’ll know that my editor, Nerine, suggested I flesh out the world where my new series will take place. This added work is my own fault, sure. I finished The Physician’s Apprentice’s first draft in seven weeks, after all. If I had done all this stuff I’m doing now to begin with, it would have meant a lot less double work. Lesson learnt.

So, for close to two months now, I’ve been focussed on adding details and working out those things that don’t make sense in my world. Paired with my tendency to obsess, it’s been interesting. 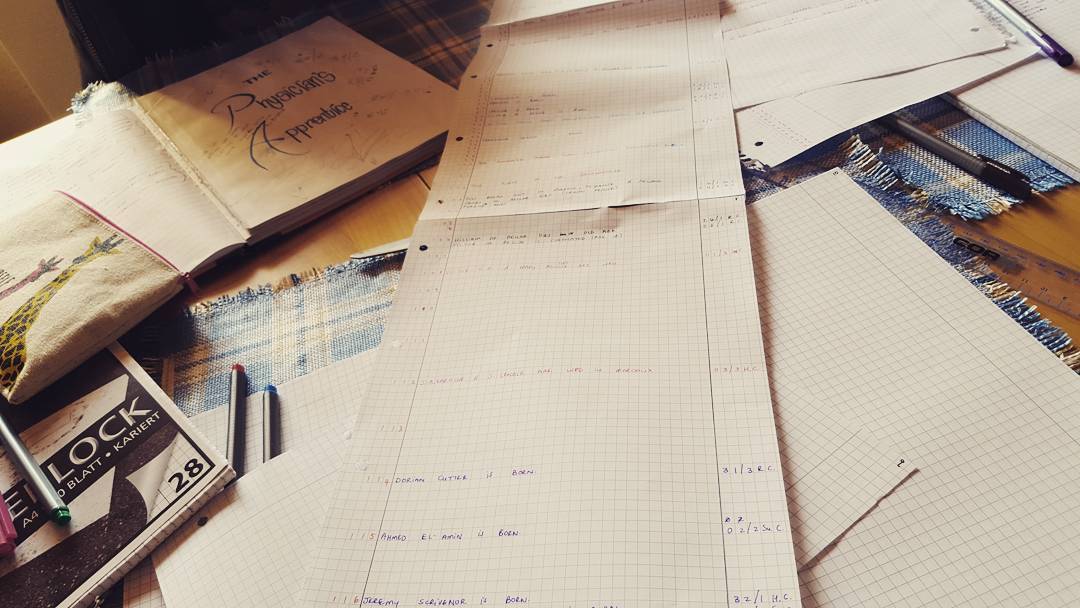 I bought a lot of notebooks and began systematically filling them with ideas and details. I also made a timeline, covering 150 years of history in the world where this story plays off. A lot of the stuff that I’ve been working on isn’t relevant to the story that unfolds in The Physician’s Apprentice. It’s background fluff, sure, but at the same time, it makes the people and cultures what they are at the start of the story.

At the same time, I was working on finishing my maps (remember? I showed it to you for the first time in this post). That took a lot of time. I wanted a detailed map with the place names of the most important landmarks and cities in every kingdom, even if most of those places will never be visited in the story I’m telling this time. Place names have to sound legit in their native language, right?

Right. Which is why this map-thing took me so friggen long. I researched place names in the languages I’m going to use in my world and tried to make city and landmark names that sounded right. This includes English, French, Dutch, German, the various Scandinavian languages, some Spanish and Farsi. Since I’m a native Afrikaans speaker, the German and Dutch place names were a walk in the park, the English was easy enough and the others were google-able. The Farsi was pretty darn difficult, and I hope that the names I came up with aren’t offensive or mean stuff like ‘camel-dung’.

Since the northern hemisphere is where the story is set and the people there know diddly squat about the south, I’m not including a detailed drawing of the south in my maps. Obviously, this is just an overview map and not the one with all the place names and so on.

I’m planning on sharing the in-depth version the map here at some point, because I’m not sure if I’ll publish that this time. Though I love a map in a novel and will spend hours pouring over it to figure out the route the hero takes, I don’t waste the time to do that in ebook format. The pictures are too small and I find it annoying to reference back and forth while reading. In a book with pages, the referencing thing is so much easier. 😀 If you have ideas or opinions on this, please let me know somewhere.

To get back to the point, my world building has reached the point where I need to order my variously scrabbled notes. Plus, there is the factor of not being able to read my own handwriting. Right now, I’m in the process of typing everything out in the right order and I’m doing this to resemble a textbook. Originally, the novel would have had a prologue that read like an extract from a history book, but Nerine has this very compelling ‘kill the prologue‘ campaign going, so I scrapped that part (click the link if you’re a beginner writer, it’s filled with tips and totally worth the read). The idea of the history book stuck with me anyway, so now I’m writing Ehrdia in Focus, which is kind of like a reference book.

Will it be published? Probably not. But it helps with the setting of the… well, setting.

From here on, I’m planning to continue working at this world. I want to write stories. songs and legends. I want to know what food they eat and how they prepare it. All of those and more details will be touched on at some point. I’ve started working on the edit of the novel in the background too. The plan is to keep in world-building when the edit is being edited. And then some.

It seriously excites me to work on all of this.

But it is all very chaotic. I have a hundred tabs open on my pc at any given time now, with photos from the people I’m using as reference for characters, to writing tips and grammatical rules, to translating apps and lists of words in various languages. I have three Word files open at all times too. One for the reference book, one for the edit of The Physician’s Apprentice and one that has Nerine’s notes.

It’s been interesting and I bet that won’t change in the near future. Even if I’m obsessing, I can’t complain. 🙂

Have a good one.